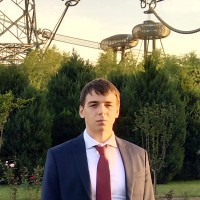 Andrey’s initial specialty was focused on electric power supply. But for the last two educational years he was working in the field of electrical distribution system control and operating and dispatcher staff training. Andrey participated in research and advanced development of the routine switching simulator on the basis of virtual reality technologies for PJSC “МРСК Центра”, have got a utility patent application. In 2016 Andrey comprehended PSI control SCADA system and developed dispatch control studying course for students on the basis of it. He continued working with this system in CJSC “CROC inc.” where he took part in Integration of SCADA system project in network control centers for PJSC “МРСК Центра и Приволжья” branches. Andrey has published several academic papers, some of them are in publications reviewed by state commission for academic degrees and titles. He also got two honors diploma (for master and bachelor degree, which was written and defended in English).

Andrey continues education and research in the field of distribution system control and optimization. In Skoltech he started working on the project of Northeast Asia Supergrid creation.