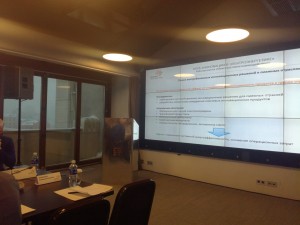 Dmitry Titov represented CES at the second session of the Club “Innovations in Electrical Energy Industry,” held in Moscow on 25 December. It attracted many participants representing leading power generating and grid companies as well as government agencies, such as the Ministry of Energy, the Ministry of Industry and Trade, the NP Market Council, the Council of Power producers, Gazprom, EuroSibEnergo, Rosnano, Rusal, etc.

Introducing an innovative product involves several stages: development, commercialization, and implementation. Firms that are intensively engaged in the activity find many obstacles along this way. Chaired by EuroSibEnergo in cooperation with the Ministry of Energy, the Club intends to address common problems in the framework of five working groups: Government Support, Science and Business Interaction, Commercialization, Open Innovations, Inter-Industry Cooperation. During its sessions power generating and grid companies, academia, developers, and state officials brainstorm on innovations in the electrical energy industry in Russia. 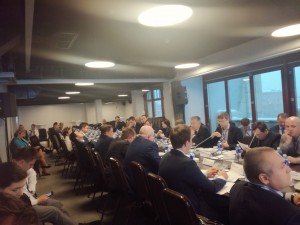 Taking part in this session paved the way for our cooperation with Sevkabel, one of the largest manufacturers of cables and wires in Russia. Its representatives were interested in using laboratory facilities of the Center for Energy Systems and methods developed by our research scientists to test their products with anti-icing properties. A meeting to discuss a roadmap for a future partnership followed soon after: Irina Lukicheva and Dmitry Titov went to Saint Petersburg to visit Sevkabel’s factory. Together with its experts, our Center applied for a grant from the Ministry of Education whose mission is to support strategic scientific and technological developments in Russia. The proposed research focuses on increasing the observability and adaptability of overhead power transmission lines in locations with extreme meteorological conditions.