Skoltech delegation took part in the Eastern Economic Forum in Vladivostok, where Russian President Vladimir Putin emphasized the project of Asian Energy Ring (also known as Asian energy Supergrid), which was being developed by Skoltech researchers for 3 years. Vladimir Putin named Energy Ring to be the most important project of all possible partner countries’ integration projects in the region.

“This integration must also be based on serious joint projects, which will sew the seams of our economic space and create new development resources. I would like to mention a number of these projects and opportunities now. First is a reliable energy infrastructure. We support the initiative of Russian, Japanese, South Korean and Chinese companies to create a super energy ring linking our countries as one. We propose setting up an intergovernmental working group in order to move ahead more rapidly and dynamically on this project. Let me note that Russia is ready to offer its Asia-Pacific region partners competitive energy rates and long-term fixed price contracts” (Source). 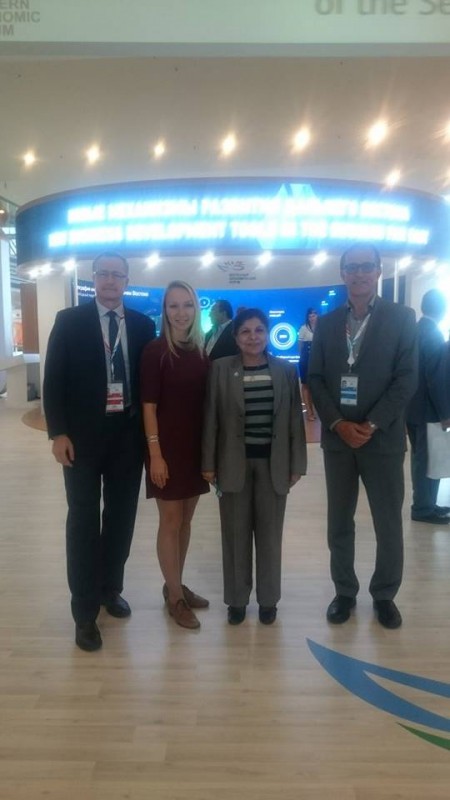 From left to right: Sergey Tulinov, Economic Affairs Officer of Economic and Social Commission for Asia and the Pacific (ESCAP UN), Ksenia Letova (Kushkina), Shamshad Akhtar and Janusz Bialek at the Eastern Economic Forum in Vladivostok.

There was a meeting between Shamshad Akhtar, Executive Secretary of the Economic and Social Commission for Asia and the Pacific of United Nations (ESCAP UN) and Alexey Ponomarev, Vice President for Strategy and Industry, Janusz Bialek, Director of the Skoltech Center for Energy Systems, Ksenia Letova (Kushkina), Skoltech Project Manager of Asian energy ring at the Eastern Economic Forum. The sides discussed prospects for the development of the Asian energy ring, the role of ESCAP in establishing multilateral political dialogue on the project and the role of Skoltech to provide analytical support to the project. Skoltech and UNESCAP have agreed on using of electric power systems models developed in Skoltech, conducting joint activities and Skoltech participating in the meeting of the first session of the Energy Committee of the UNESCAP at the end of 2016.

After the APEC summit in Vladivostok in 2012, Skoltech started the research on the development of the Asian Energy Ring under the Order of the Russian Government. At the APEC the project was first-ever discussed at a high level with representatives from Russia and Japan. In the study, researchers of the Center for Energy Systems conducted several pre-feasibility studies of selected energy bridges between Russia and the countries of Northeast Asia, including the 2013-2014 research, aiming to find the best options for Russian energy supplies to Korea, commissioned by the Korean company KEPCO and the Russian group of companies En+. In 2015 Skoltech Center for Energy Systems conducted the analysis of the development prospects for the Japanese electricity sector. This research has been made for the pre-feasibility study for energy bridge Russia – Japan in the interests of the Russian company “RAO Energy Systems of the East”. In August 2016 the Center successfully completed the expertise of Siberian and the Far East electricity sector, and elaborated the feasibility of establishing electricity exports from Russia to Japan until July 2020.

The given workouts showed the presence of the significant potential for the cooperation development. However, the joint research between Skoltech and Melentiev Energy Systems Institute point up that substantial efficiency provides not only bilateral energy relations, but also multilateral energy cooperation between Russia, Japan, China, the countries of the Korean Peninsula and Mongolia. In this case, even with the substantial infrastructure investments, the appearance of systemic effects leads to multi-billion money savings. In addition, overall benefits of creating such energy connections exceed the set-up costs. Upon that, the study represents, that the major part – about 80% of the system benefits of the Asian Energy Ring, make  Japan and China (because of no need for new generation capacity, usage of cleaner and cheaper energy sources, etc..). The non-participation of Russia in the Energy Ring leads to more than 40% loss of its efficiency. Therefore, along with the detailed research of the Energy Ring individual segments, it is also important to carry out its comprehensive and systematic study, which is the priority of the Skoltech Center for Energy Systems.

The research is divided in two stages. The first stage is broad estimation of the economic impact of the regional subsystem integrations for a set of scenarios that differ depending on the intended forecast of the energy consumption in selected countries and regions. The second stage (2016 -2017) will be implemented with the Melentiev Energy Systems Institute and suppose preparation of a unital calculation model and balance analyzes at the national and regional levels, as well as the calculation of the optimal variant combinations of existing export projects based on network topology and demonstration of the power flows changing within the power systems.