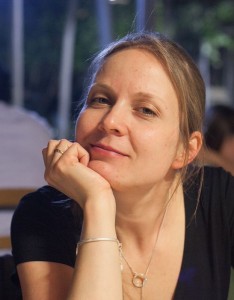 On the 17th of November 2022, as part of the Polaritonics Seminar Series, we will have the pleasure to have Prof. Nina S. Voronova discuss “Exciton-polariton full Bloch beams and ultrafast Rabi-oscillating photonic vortices“.

Nina S. Voronova graduated from Moscow Physical Engineering Institute in 2006. During her post-graduate studies under the supervision of Prof. Dr. Yu. E. Lozovik, she started to work on collective excitations in low-dimensional systems. Nina received her Ph.D. degree in physics in 2012 at the Nanostructures Spectroscopy Lab, Institute of Spectroscopy, Russian Academy of Sciences. Since 2009, she works at National Research Nuclear University MEPhI (Moscow Engineering Physics Institute), currently as an Associate Professor of the Theoretical physics department. In the end of 2015, Prof. Voronova joined the theoretical group of Prof. Alexey Kavokin in the group of Quantum Polaritonics at the Russian Quantum Center. She authored papers on vortices in polariton liquids, Rabi-oscillations in microcavities, and predicted the “Polariton Kapitza pendulum” and off-resonant direct exciton Bose condensation. The area of her scientific interests is excitons, exciton-polaritons, multicomponent Bose condensates, topological defects, low-temperature physics, superfluidity and superconductivity, bosonic Josephson phenomena.

Strongly coupled quantum fields, such as multicomponent atomic condensates, optical fields, and polaritons, are remarkable systems where the simple dynamics of coupled oscillators can meet the intricate phenomenology of quantum fluids. When the coupling between the components is coherent, not only the particles’ number, but also their linear and angular momentum can be exchanged. On the system of exciton polaritons, we have realized a so-called full Bloch beam: a configuration in which all superpositions of the upper and the lower polaritons—all quantum states of the associated Hilbert space—are simultaneously present at different points of the physical space, evolving in time according to Rabi-oscillatory dynamics. As a result, the light emitted by the cavity displays a peculiar dynamics of spiraling vortices with striking accelerations to arbitrary speeds. Setting a vortex—elementary mode of rotation and orbital angular momentum—into a directional motion, we observe the self-splitting of the packet, leading to the trembling motion of its center of mass, whereas the vortex core undergoes ultrafast precessing along diverging and converging circles. This dynamics can be accompanied by vortex-antivortex pair creation and annihilation and a periodically changing topological charge. We show that this remarkable vortex behavior results from distortions of the trajectories due to the mapping between the full wave function on the polariton Bloch sphere and corresponding Apollonian circles in the real space. Exciting the open-dissipative exciton-polariton fluid with a double topogical charge results in the creation of the double full Bloch beam, where all the possible polariton states appear twice in real space. The intrinsic quantity characterizing the topological link between the two spaces is in fact the Berry curvature whose reshaping in time describes the evolving connection of the Bloch sphere metric with the quantum states trajectories in real space.