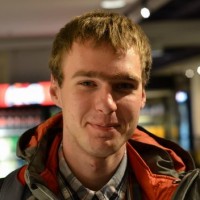 Graduated with honor as a Bachelor from MIPT (Moscow Institute of Physics and Technology), Department of General and Applied Physics, 2012. Did his Bachelor Thesis under the supervision of Ph.D. Akhmed Islamov (Joint Institute for Nuclear Research, Dubna) and Prof. Gordeliy (MIPT, Russia, Forschungszentrum Jülich, Germany, Institut de Biologie Structurale Grenoble, France) on “Interactions of pluronics with lipid membranes”

Graduated with honor as a Master from Skoltech, Biotechnology track, 2016. Did his Master’s under the supervision of Prof. Severinov (Skoltech) and Prof. Seidel (Universität Leipzig). Title of the Master’s Thesis is “Magnetic tweezers as a method to study protein-DNA interactions on an example of the type I-E Escherichia coli CRISPR-Cas system” (Award “The best research Thesis” of Skoltech 2016 Master’s graduation)

Current Research project: current research project is dedicated to study type I-E CRISPR-Cas system from organism Escherichia coli. Our aim is to investigate how proteins and protein complexes of this immune system interact with its target DNA. On the single molecule level we observe binding of ribonucleoprotein complex Cascade to target DNA sequences and can confirm the influence of the target changes on the binding rates, lengths of resulting R-loops and its stability. As well, we can investigate directly ability of the engineered Cascade complexes with changed crRNA lengths to successfully bind to target DNA and form stable R-loops. This is aiming to investigate such important but not yet fully understood phenomena as primed adaptation happening in some of the type I CRISPR-Cas systems. Furthermore, it promotes the study of these systems towards becoming useful biotechnologically tools in future.

Now conducting research in Prof. Seidel group in Leipzig University. https://exp1.physgeo.uni-leipzig.de/mbp/ Single molecule techniques such as magnetic tweezers is one of the specialties of this academic group. In terms of CRISPR study, it allows to detect primary effector complex Cascade interaction with target DNA sequence on the single molecule level, as well as cut of the first and second strands of target DNA by Cas3 nuclease upon Cascade binding. This opens a unique opportunity to study in vitro underlying mechanisms for the processes and phenomena happening in living cells and no yet fully explained.