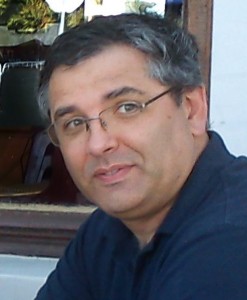 Artem received his Master’s degree and Ph.D. in Chemistry from Moscow State University (MSU) in 1993 and 1997 correspondingly. After that, he built his career as a successful researcher, beginning first as Junior Researcher in MSU Department of Chemistry. Before being promoted to the position of Researcher at MSU in 1999, Artem spent two years in the Electron Microscopy for Materials Science (EMAT) laboratory, University of Antwerp, conducting his postdoctoral research. From 2004 to 2008 Artem was Deputy Chair of the Inorganic Chemistry Division of MSU Department of Chemistry, where he was also promoted to Senior Researcher in 2006. Before joining Skoltech, Artem worked at the EMAT laboratory as a Research manager of the Industrial Research Fund (IOF).

Artem has published more than 200 articles in peer-reviewed journals with overall citation index of >2200. He also served as a referee for a number of international journals, such as Nature Communications, Journal of the American Chemical Society, Chemistry of Materials, Inorganic Chemistry, and Journal of Solid State Chemistry. His professional affiliations include, among others, membership in the European Microscopy Society and chairmanship of the Special Interest Group on Aperiodic Crystals of the European Crystallographic Association.

As a Skoltech professor, Dr. Abakumov will continue to work on establishing a team of highly qualified scientists performing cross-cutting research in the field of materials for electrochemical applications.

Let us welcome Professor Artem Abakumov and wish him success in his important role at Skoltech!