Center of Energy Systems of Skoltech took part at the Round table on Power Trade and Grid Connectivity in North-East Asia, that was held in Irkutsk, Russia in 17 September. The Round Table meeting was organized by the United Nations Economic and Social Commission for Asia and the Pacific (ESCAP) (in partnership with the Energy Systems Institute, Siberian Branch of the Russian Academy of Sciences (ESI SB AS) and Korea Energy Economics Institute (KEEI)).

The meeting was attended by approximately 32 government officials, business and academic representatives and experts from electricity sectors of China, Mongolia, the Republic of Korea and the Russian Federation. It was also attended by resource persons from the International Energy Agency (IEA).

The objectives of the Round Table were to enhance the opportunities to facilitate energy cooperation in the electricity sector through multilateral channels, to identify benefits and challenges, as well as measures of regional cooperation to facilitate power trade and grid connectivity for NEA economies.

Manager of the Asian Energy Supergrid project, Ksenia Kushkina, represented Skoltech at the “New Grid Connectivity Projects for North-East Asia” roundtable, where she presented results of the research conducted in accordance to Russian Government’s order of 06.08.2013 by SkolTech’s Center for Energy Systems in conjunction with the Irkutsk Institute of Energy Systems and support of Korea Electric Power Corporation (KEPCO).

Participants from other countries, like China, Mongolia, South Korea and others, noted high importance of grid connection studies, but also pointed out the lack of coordination mechanism or body to address political issues such as implementing and coordination of NEA regional Power market. The participants suggested to use international organizations, like ESCAP, to create such a mechanism and a roadmap to provide a direction of the regional grid interconnection implementation process. 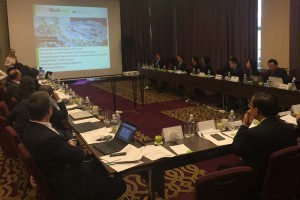